Role of calcineurin in glial cells in health and disease 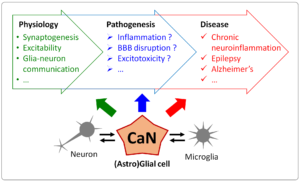 Calcineurin is a Ca2+/CaM dependent phosphatase that senses activity and decodes cellular messages. It is a ubiquitous enzyme and is the target of some of the most important immunosuppressants, tacrolimus and cyclosporin. While it is abundantly expressed in neurons, we have found that also glial cells express this protein. We are interested in understanding its role in norma lastroglial physiology as well as in disorders such as Alzheimer’s disease and epilepsy. 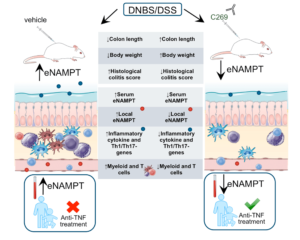 eNAMPT administration DNBS and DSS-treated mice exacerbates the symptoms of colitis, suggesting a causative role of this protein in IBD. To determine the druggability of this cytokine, we developed a novel monoclonal antibody (C269) that neutralizes in vitro the cytokine-like action of eNAMPT and that reduces its serum levels in rodents. Of note, this newly generated antibody is able to significantly reduce acute and chronic colitis, reducing pro-inflammatory cytokines and the number of inflammatory cells.

This work has been funded by PRIN Grant (PRIN 2017 CBNCYT). 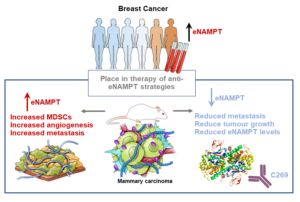 eNAMPT has been linked to cancer. The current literature largely confirms that serum and plasma levels of eNAMPT are increased in almost all cancer types analysed compared with healthy subjects. In the context of breast cancer, eNAMPT serum levels are higher in postmenopausal breast cancer patients compared to matched controls and its levels correlate with TNM staging, tumour size, lymph node metastasis and histological grading.

We investigated the anti-tumoural potential of C269 in the 4T1 allograft of breast cancer. As postulated from human data, plasma eNAMPT levels were significantly higher in control tumour-bearing mice compared to control healthy animals and this increase was counter-acted by the use of C269 in tumour-bearing mice. Interestingly, the treatment with C269 reduced tumour growth, tumour weight and spontaneous lung metastasis.

Research in pharmacogenetics: from experimental studies to systematic reviews and meta-analyses

“Variability is the law of life, and as no two faces are the same, so no two bodies are alike.”

Variability in genes implicated in drug pharmacodynamics or pharmacokinetics may affect the clinical drug efficacy or predispose the patient to develop adverse drug reactions. In a number of ongoing pharmacogenetic studies, we are testing the potential clinical value of selected genetic variants in predicting the efficacy and safety of a plethora of pharmacological treatments for different diseases, including headache disorders (episodic and chronic migraine, cluster headache), chronic low back pain, acute renal graft rejection, colorectal and breast cancer.

Meta-analysis is a statistical technique that combines the results of several studies on the same subject, in order to generate a quantitative summary of the findings. The purpose of this line of research is to conduct systematic reviews and meta-analyses to assess the clinical validity of potential pharmacogenetic markers. The identification of genetic determinants with proven clinical value could pave the way towards implementation of pharmacogenetic testing in clinical practice.

These research projects are funded by:

Tubular Aggregate myopathies are a cluster of heterogenous muscular disorders arising from mutations of Orai1, Stim1 or CasQ genes. The cellular consequences of these mutations is a dis-homeostasis of Ca2+-handling in a number of cell types, including muscle and platelets.
The group is involved in characterizing a mouse model that resembles the disorder both to unravel some of characteristics of the disease and to validate it as a platform for drug research and development. In this process of doing so, it collaborates closely with the group of Prof. Tracey Pirali to discover new modulators of the Orai1 channel that are hypothesized to contrast the progression and the symptom of the disease.
This work is funded by Telethon (for a description of the project in Italian).
A Facebook group has been set up to allow for patient empowerment and involvement in this project (Miopatia ad aggregati tubulari – Italia).